In the spirit of Ahimsa (non-harm, the gift of fearlessness) Liberation Park is a sanctuary for furred and feathered friends as well as two legged humans. In addition to the wild creatures who share their valley home with us, Liberation Park is home to a small population of cats (both feral and domesticated) as well as a small herd of horses.

Jo Marie, who grew up on horseback, has adopted and assumed responsibility for three horses from a neighboring farm, as a gift to Liberation Park. We hope the presence of these magnificent, curious teachers will enhance the healing qualities of Liberation Park. Their names are Tara, Jera, and Junebug. Momma (Tara) is a full Percheron and the two youngsters are Percheron-Quarterhorse crosses.

Foster horses in need of homes or temporary sanctuary join the herd at times. Please see this page to view horses & kitties available for adoption.

The equine project at Liberation Park, including pasture, barn and fencing, are funded privately by Jo Marie. Occasionally individuals have made donations specifically for animal care or to help fund the rescue of a designated animal. Aside from these, donations to Liberation Park are not used to care for horses or to provide any of the infrastructure required for their care. 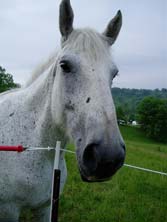 Tara was pregnant when she arrived in the spring. The foaling date was never clear, probably in June, but it was uncertain. So we watched Tara diligently for signs of impending birth. We watched for 6 weeks! Jera finally arrived in the wee minutes of July 12th. He was up on his legs within 20 minutes and walking soon after. By dawn, he could follow momma up some of the slopes and was mastering them within days. He quickly grew into a lovable, precocious colt. 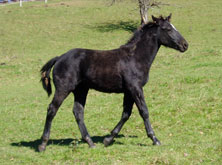 Junebug arrived October 14. She was born June 2 to one of Tara's sisters and shares the same father as Jera. Her Aunt Heather, from the natal herd & an old friend of Tara, came along to help Junebug adjust as she was weaned and got used to her new home. It didn't take long for Jera to accept his new "big sister" and they became playmates, which took some pressure off Tara's older legs.

On occasion and as pasture allows, Liberation Park is able to foster one or two horses in search of their forever home. Horses are accepted according to need and ability to blend with the resident herd. Horses in need of rescue, or facing bleak or uncertain futures, are given priority. Stallions or overly aggressive souls cannot be fostered at LP. We are also a frequent way station for homeless kitties. Horses & kitties available for adoption can be viewed here.